HomeResearchAizawl City; The requirement for a Comprehensive Investigation on Landslides 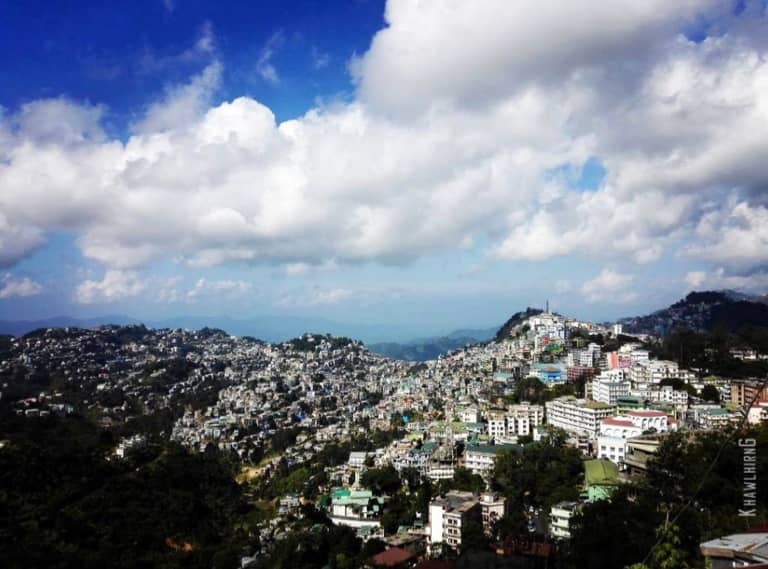 Located in the northern part of Mizoram with Tlawng river valley to its west and the Tuirial river valley to its east, Aizwal is the state capital and the largest city of Mizoram, and has, according to census 2011, the population baseof 293,416.The chief economic activity of the city apart from tourism is government administrative services as it is also the capital city. In the context of demography, female populationconstitutes around 51% of the city population while men constitute the rest 49% of the population. Furthermore, Aizwal represents more than 25% of the population of Mizoram state population. So, this city is important in the context of socio-economic activities.

Primarily, this state has been vulnerable to landslides and the Aizawl city is no exception. Moreover, the geography of the Aizawl city needs to be analyzed to understand the city better from the perspective of sustainable livelihoods. This is a primarily a hilly town which is situated at an altitude of 1,132 meters above the mean sea level and has undulated terrain, which makes it exposed to diverse natural hazards.. The observation made in the recent years is that landslides destroyhouses and blockroads frequently in and around the Aizawl city, hence impacting the economics, the tourism and the connectivity. Also, there has been significant loss to Aizwal, in terms of human life and infrastructure.

There are various natural exposures such as floods, flash floods, earthquakes and landslides. When we hear the word; floods or earthquake, a devastating picture of mass destruction pops up in our mind. Generally, when we come across any news about flood or earthquake, we often see washed away lands with damaged houses and  loss to infrastructure. Apart from this, there are other aspects to this destruction too which need to be discussed and understood.

For example,Let’s say, we are enjoying the incredible cityscape and are mesmerized by the undulated terrain of city. Moreover, the lush green ambiance which envelopes the city is atreat to the eyes. And yes, the house which is located next to our vantage point has succeed to hold our attention due to its lush green surrounding and vulnerability. In fact, its vulnerability is making its presence more felt. Since the house is in an undulated terrain, therefore there is kind of hilltop view from the balcony of house. So, we were discussing: it would be a surreal experience if we had a chance to spend a few days in a house like this! Suddenly, something happened which we even can’t imagine in our wildest of dreams. In a few moments, house swept away! The house which captured our attention by its location in the serenity of the hilltops, is no more there. What was that! A Landslide. True, vulnerability of house was one of the reasons for making its presence felt; now the same vulnerability of house is reason for making it non-existent.Landslides are common in the regions which have undulated terrain and are situated at higher altitudes.The view with roads blocked is very common. Sometimes, major landslides sweep away large number of houses too, which causes huge loss to human lives &infrastructure. Alas! Landslides are like silent killers.

Let us understand more about what induces Landslides? Firstly, it isimportant to mention that landslides can either be induced due to rainfalls or earthquakes or both. This means that rains, even those, which may pour continuously for few hours or if the intensity is above than average in the areaare very likely to trigger such catastrophic events. Therefore, if there has been consistent heavy rainfall in a region like Aizawl, people need to be aware and stay alert for the following reasons:

Investigation on landslides may help in managing the situations where there is a possibility of landslide dangers. Subsequently,the findings from such studies and investigations can be very helpful and used for disaster management. This may help in saving countless lives and immeasurable loss to infrastructure, both Public & private. In addition to this, the same may also help us in preventing the landslides which brings the city to a standstill kind of situation. The hilltop cities are dependent on major roads and don’t have much alternatives in terms of connectivity. So, if there is any scenario where landslides block the commercial or major transport roads, this could severely hit the lifeline of the city and people. Therefore city like Aizawl, which is exposed to such possibilities, needs a proper disaster management plan proactively in order to be prepared for any unfortunate event and to handle such possibility in a way better manner effectively.Comprehensive studies on landslides for Aizawl city is also important for the following reasons: