HomeResearchAre we losing Majuli, the largest river island, in the world? 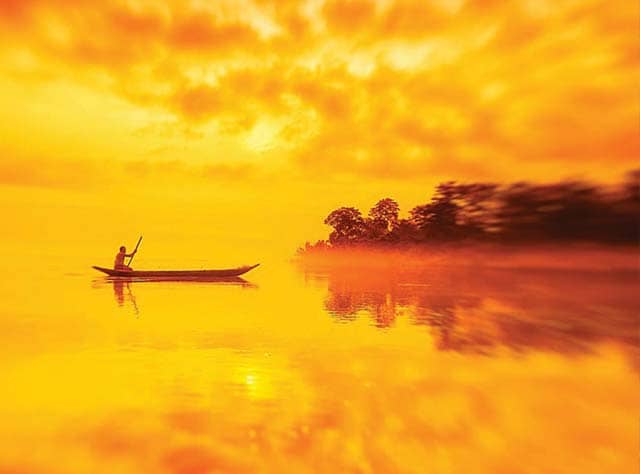 Is Majuli, the largest river island of the world, inching towards non-existence?

“Majuli means land between two parallel rivers. This has been the cultural capital of Assam
since 16th Century and is the abode of the Assamese neo-Vaishnavite culture “

Persistent edging of the mighty Brahmaputra river has pushed Majuli to a possibility of becoming non-existent in next 15-20 years. Majuli, the largest river island in the world, which came into existence due to the Brahmaputra river, may someday disappear into the vastness of it. Majuli is not just a river island; it is an epitome of Assamese culture too.

Majuli is significant in context of the river ecosystem investigations, and also from the perspective of cultural geography. Experts have been of the view that consistent floods are the primary reason for significant soil erosion in this river island. Absence of proper mechanism to control soil erosion has been aggravating the situation further. 40 % of the total area of Majuli is now lost. It is believed that in the early 20th century, the area of Majuli was 880 Sq.Kms which got  reduced  to  only  352  Sq.  Kms in 2014.  This statistic is frightening and is posing many questions on the future of Majuli’s existence. Majuli is a wetland, and hotspot for diverse flora and fauna. Furthermore, it is an adobe for migratory birds and endangered species in the winter season. However, as aforementioned, unprecedented soil erosion has become a looming threat on the existence of the largest river island of the world.

Inclusive study is required for taking care of ‘Majuli’

We are required to feel the ethos of ‘Majuli ‘when we decide to study the challenges of this river island. This is necessary to understand that this river island is not just a land which is vulnerable to erosion, but is a land of culture. If we lose ‘Majuli’, a piece of ours will be lost. As mentioned above Majuli means land between two parallel rivers which also implies an eternal relationship between the people of this island and the ‘Brahmaputra’ river. Therefore, when studying Majuli’s problem, it is necessary to include both physical and social aspects as well.

If the focus is placed just on the physical aspects of a sustainable long-term solution may become difficult to achieve.

In terms of the physical aspects of the study, advance technologies such as satellite remote sensing and GIS should be used to assess the river dynamics in a spatial-temporal domain.

Furthermore, such technology may be very effective in erosion studies as well. Employing such advanced technology will help in upscaling the studies effectively and rapidly. Moreover, it will also help in assessing the situation in a more comprehensive manner.

Assessing river dynamics in a spatial-temporal domain may require large datasets, and therefore, it is necessary to employ frameworks which can construe the complexities effectively.

Almost every year the river swells up and eats away a major portion of the land. With a vanishing Majuli, the heritage of the Assamese culture and livelihood, both seem to be dying out slowly. There are about 220 ethnic groups and at-least 45 languages that are spoken in the Brahmaputra valley, all soon to die off if nothing is done to save it.

A shrinking Majuli can not only disrupt cropland but affect the livelihood of the many who live there. Even though there have been restoration interventions in the past, nothing has been able to provide a largescale recovery. An immediate need to implement a holistic disaster management plan is now inevitable and a pressing priority to safeguard this sinking isle.

Picturesque Aizawl city has its ownSilent Devils Located in the northern part of Mizoram with Tlawng river valley to its west and the Tuirial river valley to its east, Aizwal is the state capital and the largest city of Mizoram, and has, according to census 2011, the population baseof 293,416.The chief economic activity of...